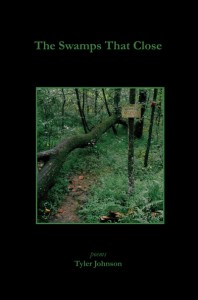 “The Swamps That Close is a collection of poems deeply rooted in the voice and nature of the American South. These poems view that experience on the long continuum of time from prehistory through rural America to a bristling technological future that reaches far but somehow never quite escapes its primordial urges. Like the frog packed in cool mud and water whose stillness may explode in a crash of predatory death, these poems live on the edge of violence, yet this world is filled with rich smells, sounds, humor, music and hope.

The Swamps That Close is Tyler Johnson’s first book of poems. Published in 2004, it includes early explorations in rural Southern, musical, and humorous voices.