Tell us a little about your music and dance career. Where have you lived and danced?

I’ve lived in England, Tennessee, Arizona, North Carolina, and Nova Scotia (and I became a Canadian citizen three days ago!). I’ve been playing Celtic music since high school, but didn’t

begin step dancing until I was nearly thirty. I went to Warren Wilson College in Asheville and have been involved with the Swannanoa Gathering on campus over the years as a volunteer, staff member and instructor (if you don’t already know about the Gathering, check out www.swangathering.com). It was there that I saw Cape Breton step dancing for the first time and decided I had to learn, although at the time I had idea how I’d go about it. Less than a year later, I met Malke Rosenfeld, a phenomenal percussive dancer who was living and teaching in the Triangle area at the time. I ended up joining Cucanandy, a band founded by her and her partner, quit my day job, and went on the road with them for five years. Malke was very generous about teaching me as much about percussive dance, and Cape Breton dance in particular, as I wanted to learn, and I began to dance with her a little bit in performance (I spent most of my time onstage singing and playing bodhran and rhythm guitar). After the the band split up in 2002, I began teaching Cape Breton dance in Asheville, eventually forming a semi-professional performance group called Twisty Cuffs Percussive Dance. In 2008 I married a wonderful man who had just gotten a job as a Celtic studies professor at St. Francis Xavier University in Nova Scotia, Canada, which happens to be about half an hour from Cape Breton Island, so I spent five years surrounded by people who had grown up immersed in step dancing and Gaelic culture. We have just moved back to North Carolina, and I’m excited to reconnect with the music and dance scene down here.

What do you do when you are not dancing?

At the moment most of my energy is going into raising our sixteen month-old daughter, Róisín (whose name means “Little Rose” in Irish), but I tend to have my fingers in lots of creative pies. I’m a Scottish Gaelic learner, and I directed a Gaelic choir in Nova Scotia for three years, which is something I’d like to try to get going down here in the next year or two. I’m also an avid knitter and sweater designer, although having a curious toddler in the house makes it hard to get much knitting done these days.

What’s one funny thing that happened to you while dancing? 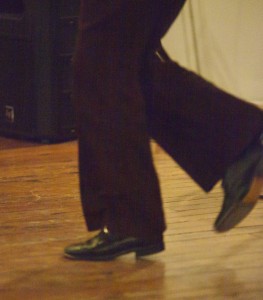 Cucanandy used to top off the night with a big set of tunes, at the end of which I would hop up onto Malke’s 3’ x 3’ dance board and join her for a fairly manic piece of choreography. It was usually the only time the audience saw me dance, so it was our big surprise knock-’em dead number. If you take a moment to visualize a three-foot platform of plywood, you may realize that’s not a lot of room for two people in tap shoes who are hopping up and down and swinging their legs around. There were many times that we each came perilously close to one edge or the other of the board, but I remember one night in particular: Malke’s shoelace came untied and all she could manage to do to warn me was yell “Danger!” By the end of the piece we were both in giggles, but neither one of us tripped on her lace.

It seems like dancing in community is a really common thing across cultures and times. What purpose do you think dance serves?

I think it serves many purposes, but what I love most about dancing, and percussive dance in particular, is that it’s a full-body way to enjoy great music. I’m one of those people who can’t sit still if the music’s good, and getting to play along with my feet is about as joyful an experience as I can imagine.

How does percussive dance relate to community dance?

Percussive dance is often incorporated into community dance styles. There’s a great tradition in Cape Breton of community “square dances” which are very similar to Southern Appalachian square dances: couples move through a set of figures with other couples, often while doing fairly simple percussive steps. And, like the flatfooting and clogging traditions down here, particularly skilled dancers will often get up and perform more complicated steps during breaks between sets.

How long did it take you to become proficient at percussive dance?

I was performing a French Canadian waltz clog onstage with Cucanandy within a few months of starting to learn, but I had an exceptionally good teacher and was highly motivated to get good fast.

Who are some of your biggest influences?

Malke was my first and biggest influence, but I’ve known some other wonderful dancers along the way, including Ira Bernstein, Wendy MacIsaac, and Benoit Bourque. I was introduced to Malke by a lovely rhythm tap dancer in Blacksburg named Ann Kilkelly, who turned me on to Bill Robinson and other classic dancers of his era. Ellie Grace (of the Grace Sisters) is a good friend who showed up one day for a dance class and ended up playing a big a big part in the formation of Twisty Cuffs.

What’s one thing that you hope to do in your life that you haven’t gotten around to yet?

I started working on a novel about flamenco dance (another obsession of mine) the year before my daughter was born, and I fantasize that some day I will managed to pick it back up and finish it. 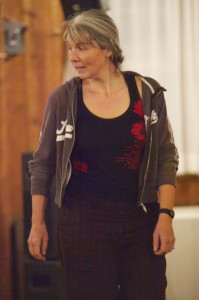 Stephanie Johnston has been teaching dance since 2002, and was the founding director of the Asheville-based percussive dance group Twisty Cuffs. She toured with the Carrboro group Cucanandy from 1997 to 2002, and has taught classes and workshops up and down the East Coast in the US and Canada. She studied dance with Malke Rosenfeld, Bonnie Jean MacDonald and Jean MacNeil (“mother of the Barra MacNeils”), and has danced onstage with Buddy MacMaster, Ira Bernstein, John Doyle, Liz Carroll, and numerous other luminaries of Celtic music and dance. To stay updated, “like” Step Gael on Facebook. Information on her April classes can be found on the ArtsCenter website at http://www.artscenterlive.org/classes/2119-cape-breton-step-dancing/