I dropped my son on his head when he was an infant.

I was just getting the hang of the whole diaper changing thing. I finally had him changed but needed to get him dressed, so I sat him upright on the changing table while I reached down for a tiny shirt. I forgot that he didn’t know how to sit.

He just fell forward and did a faceplant onto the wooden corner of the table. No stomach muscles whatsoever. I picked him up. He was stunned. So stunned that he didn’t breathe. You could see the astonishment dawning on him. The utter shock that the world had done something so awful to him. It had never occurred to him before that this was possible. This was a whole new level of disappointment. And I was the one that had brought it to him.

He was devastated. So he started to bawl, completely overcome.

I felt terrible. But then I saw a circle of white appear in the center of his forehead. As he cried it grew into a knot the size of an egg.

A lot of our parenting failures happen in private. We whisk the mess into the trash, or make up a lie, and the whole thing passes. But I was not going to be able to hide this. He was growing a green and blue Easter egg right in the middle of his forehead. I was terrified at what his mother would say when she came home. So I panicked: I called my neighbor and confessed. In what I remember to this day as one of the greatest kindnesses ever offered me, she shared a whole list of disastrous things she had done to her son. As she recounted each terrible event I felt a wave of new relief.

Luckily, he survived this event, and more. Now he’s sixteen and a second degree black belt. And yesterday he was honored by the Governor as youth volunteer of the year for his work in teen court and the juvenile justice system.

I couldn’t be more proud. But I am utterly scathed.

I think that raising a child is like playing football. You catch the little pigskin in your own end zone and cradle it under your arm. Ahead of you is a swirling mass of danger. But you tuck and run for all your worth. You’re kicked, and tackled, and take helmets in your gut. And if you’re lucky you finally fall, battered, bruised, and with an Easter egg in the middle of your forehead, at the 99-yard line, stretching that ball out in front of you into the end zone.

At that point you can’t even hear the cheering. The game has moved on. And probably you’re out for the season. Maybe for life. Maybe this was your one big play.

It was worth it. 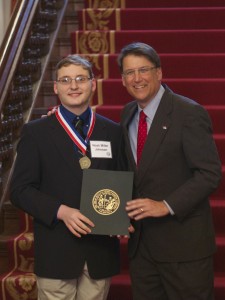